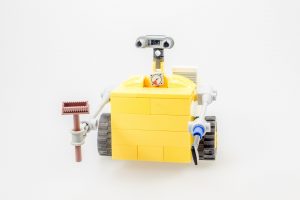 No WALL-E for This Guy!

If you've watched the 2008 animated film Wall-E, you might remember a cute futuristic story about a little robot who falls in love and helps to save a civilization that made the earth uninhabitable through environmental neglect. In the film, they were able to see the impending problem, and earth's population was taken off the planet to live on space traveling cruise ships. Though this was a "kids" movie, it was also a satirical commentary on society. People in the film had become glued to monitors - doing virtually nothing else - having practically every need met as they sat in their comfortable recliners staring forward. Absorbed by the screen, they didn't even make human contact. Robots delivered all the food and drink one could ask for. Sleeping in those same seats, they hardly moved at all (though I don't recall anything about restrooms).

As I thought about it back then, it did seem that our society was spending an inordinate amount of time on computers and other devices. That has only grown in the last 12 years. But now perhaps there IS something good that is coming out of this pandemic as we are being forced to do even more online - including church! Don't get me wrong. I am grateful that we have technology where many of us can see and hear each other even while we social distance. I must admit however, that even this guy, who has enjoyed screens his whole life, is getting a little tired of them.

Like most of you I suspect, I am longing to get out and make human contact - to shake a hand or get a hug. To worship te Lord in the presence of my church family. To go out to dinner - first with my sweetheart - and then with another couple or two. To open my door and invite some friends or neighbors in for coffee and a chat. To browse through a brick and mortar store and pick something up without worrying about who touched it last. And maybe....just maybe to not have to look at a screen for a whole day or even two.

Many of you have said it, but it bears repeating. I think through this the Lord is teaching some of us to appreciate things (and people) we have neglected or at least taken for granted for some time now. Yes, in all the negative, there are some positive things happening. We will survive this, and like the saying goes, whatever doesn't kill you makes you stronger. Let's take those positives and let them continue to strengthen our lives.  Let this be one generation that will remember these days and not fulfill the "Wall-E prophecy".